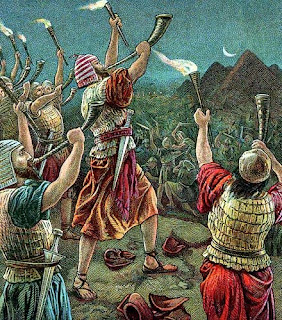 We are called on to trust in God and trust that the Lord will provide for our needs. We are called on to offer what we can and have the faith that God can do great things with our gifts. But that does not mean we can sit back and do nothing while God takes over.

Gideon’s story ends at Judges 8:32, but the climax of the tale of Gideon and the Midianites occurs here. What plan did Gideon have? What “weapons” did his soldiers carry? What was the result?

Although the battle was won by God and not by the number of soldiers Gideon brought to battle, there was a bit of clever strategy on Gideon’s part. He set his soldiers so that they surrounded most of their enemy, and his attack was set for the middle of the night during a time of confusion.

While the Midian guard was being changed the three-hundred men under Gideon blew trumpets and broke jars exposing burning torches. The sudden appearance of 300 torches, the sound of the trumpets, and the shouts – “A sword for the Lord and for Gideon” – would be perceived by the Midians as an attack of 300 companies of soldiers, or 30,000 men.

Assuming that 30,000 men were surrounding their sleeping and unprepared army, the Midianites panicked and fled. The battle was over and the only weapons used were trumpets and torches.

We can trust in God, but like Gideon we also must be clever and creative with our gifts and our skills. We must be wise in our approaches to serving God and performing our ministries. Working together with the Lord, applying our skills and God’s power, we can do much for the kingdom of God.

DAILY CHALLENGE: Is there a place in your ministry that requires creativity? 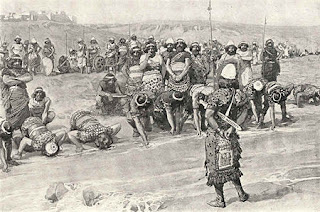 One of the things that really impresses me about the Gideons is that all of your contributions go toward purchasing Bibles for distribution. The costs of travel, meetings, publicity, and even their banquets are all paid for by the members themselves. It is required of the members that they be self-sustaining, allowing donations to be much more effective.

Although Gideon sent home about two-thirds of his fighting force, God was still not satisfied with the numbers. What does God instruct? Which soldiers did God choose?

Some people have explained that God chose the soldiers who lapped with their mouths like a dog because it was a demonstration of their ability as soldiers. By lapping, these folks claim, the soldier was more able to detect if an enemy was approaching. I must confess that explanation doesn’t work for me; in fact, the opposite seems true to me.

Regardless of the reasoning behind it, God told Gideon to send home 9,700 of the remaining 10,000, leaving him with 300 men. Gideon was left with less than one percent of his original force. If Gideon is to have a victory with this force, then it must be very clear that God is responsible.

Like Gideon and like the Gideons International, being willing to do things in an unconventional way causes you to trust God. Gideon sent home most of his force. Yet, he trusted God. The Gideons must trust that they have sufficient funds to run their organization. They don’t dip into the contributions that are made.

We need to take a lesson from both of these. Rather than fret and worry that we have insufficient ability or time, rather than claim we don’t have enough money to make a difference for God, let us all begin trusting what little we have to the Lord. He will make good come from our offering, no matter how small we think it is.

DAILY CHALLENGE: Where do you need to trust God more? 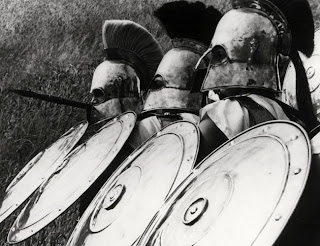 The Gideons not only put Bibles in hotels, they strive to put a copy of the Bible, or at least the New Testament, in the hands of people all around the world. The Gideons can take your small donation and use it to pay for the printing of many Bibles which are then handed out free. Their dedication and work in reaching the whole world with the good news of Jesus is incredible.

As the story of Gideon in the Bible progresses we see Gideon amassing an army of 32,000 men to fight the Midianites. What does God declare? Why does He decide this? What does Gideon do?

One of the basic rules of military strategy is “Never underestimate your enemy.” It is wise not to go against an opponent with complete confidence that you will win. A little fear can be a good thing. It is best to be prepared for any eventuality.

With that in mind, what Gideon does seems completely counter-productive. Why in the world would a military commander send two-thirds of his fighting force home?

God claimed that the army was too big. Victory, apparently, would be too easy and then the Israelites might begin to think that hey won the battle on their own. To guarantee that they knew God had given them the battle God had Gideon send most of his army home.

When we look at ministry and outreach we can think that what we are putting into the effort is what makes it work. We can also have the opposite attitude, that no matter what we do we can’t accomplish anything. We may ask how our contribution of few dollars can make a difference.

We need to be like Gideon. We need to trust that our small donation can be used by God to make a huge difference in the world. We need to remember that it is not us who gets the ministry work done; it is the power of God working through us.

DAILY CHALLENGE: Where do you need to trust the power of God in your life?

This coming Sunday is “Gideon Sunday” for our church, so we will be looking at the story of Gideon from the Book of Judges. Gideons International is an organization of Christian businessmen. They are most noted for the Bibles they place in hotel rooms; however, their work goes so far beyond that. They derive their name from the story of Gideon.

The story of Gideon actually begins at the first verse of Judges 6. A tribe of people named the Midians have taken over Israel and are oppressing the people, ravishing the land with their presence and stealing crops and livestock from the Israelites.

Why was Gideon in the winepress? How does the angel address Gideon? Gideon challenges the angel in verse 13. What is the response in verse 14? How does Gideon describe himself? What is God’s response?

What we know about Gideon is that he is hiding when the angel arrives. He is working in a winepress so that the Midianites won’t see him and take his wheat. He also describes himself as “the least” in his family, and his tribe as “the least” of the tribes. In other words, Gideon considers himself a weakling and a nobody who is hiding from his enemies.

Yet, the angel greets him as a mighty warrior. The angel further instructs him to “Go in the strength you have and save Israel.” These words all seem to contradict Gideon’s perception of himself. God clearly sees Gideon as one who has the ability to accomplish what God wants done.

The same is so often true for all of us. We don’t see ourselves as a great servant of the Lord, a great preacher, a powerful missionary. But God knows us completely. God sees the potential in what we are able to do and be.

Like Gideon, we are called to trust in the Lord and obey His commands. In that way God can help us do the work God wants done.

DAILY CHALLENGE: What potential do you feel is waiting inside you?

You can learn more about Gideons International by visiting www.gideons.org

Many Sundays I hear this at the door of the Sanctuary or on the steps in front of our church. It’s not a problem to me. I am glad to know someone was listening, and I am truly welcoming of any comments. Many expand my knowledge and understanding so I can improve.

If Matthias was the first lay leader, then Priscilla and Aquila were the first Pastor-Parish Relations Committee.

It is stated plainly that Apollos was an intelligent man, learned in the Scriptures and a fervent preacher of the way of the Lord. All good qualities.

But Priscilla and Aquila, disciples of Paul (see Acts 18:1-2 and Acts 18:18), had more to teach him. They did not correct him, that is to say, they did not contradict or condemn what he had been preaching. They explained it more adequately. They gave him more information so that he could do even better at what he already was doing well.

These two were not scholars from a university. They were not recipients of Christ’s wisdom. In fact, they may be relatively new to the faith (Acts 18:2-4). But they did have knowledge and they did have strong faith, and they were willing to share that faith and wisdom.

We believe in the ministry of all believers. All people who believe in God have a ministry of some kind. It is up to all of us, not just pastors, to preach and teach when the opportunity arises. But more than that, we should all find a ministry – any ministry! – where we are comfortable and successful, and pursue it.

DAILY CHALLENGE: What talent can you use for God?