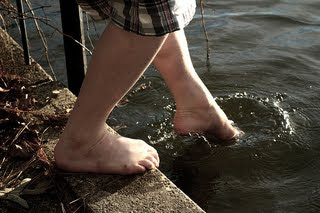 When presented with a nice swimming pool on a hot summer day most people will dip their toes in the water to see how comfortable – warm or cool – the water is. Others are a bit more daring and are willing to simply dive into the water, taking what comes. In either case, both types of people usually end up in the water at some point.

Like the passage in Mark 14:52 this portion of John seems to have a unique detail that may make us wonder. Why are we presented with the details of the linen and burial cloth?

A simple explanation is that this is evidence that the body was not stolen. If someone had taken the body of Jesus they would have taken the burial cloths with it. Since the linens and head-cloth are still in the tomb it is an indication that Jesus did indeed rise from the dead and was alive again.

We also have two approaches to the tomb. Peter, always impetuous and eager, rushed inside to discover the abandoned linen. John on the other hand was a bit more tentative. In both cases, however, these two disciples entered the tomb, saw and believed.

We may be like Peter. We may hear the stories of Jesus and hear about the love of God and immediately trust and believe in God’s grace and His kingdom.

We may be like John. We may need time to understand what faith is all about and in time come to have the deep faith and belief that we need.

As we come to Easter and the celebration of the resurrection of Christ we need to find our faith and belief in God’s love. We need to see and believe in the eternal presence of the living Christ. Then we need to carry that faith with us and go beyond the tomb to live our faith in the world.

DAILY CHALLENGE: How can you live out your faith in Christ? 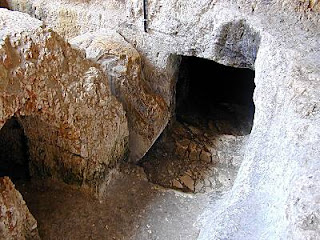 When I worked at a newspaper my fellow editors and I were frustrated with what we perceived as a lack of appreciation from the publisher. Like other people in other jobs, we spent some time as we worked griping about our fate, how much we worked, how little we were paid, the lack of proper equipment to make our jobs easier, and so on. Mike, one of the other editors, kept telling us that if he ever had the chance to sit down with the publisher he would give him an earful – really lay our complaints on the table.

As luck would have it the publisher took us all out to lunch one day so we could air any complaints we might have. Mike remained silent through the entire lunch.

John’s story of the resurrection continues with Peter and “the other disciple,” whom most experts agree is the disciple John. How did these two react to Mary Magdalene’s news? Who reached the tomb first? What did he NOT do?

We can see an eagerness in these two devout followers of Christ. Peter and John have learned from Mary that Jesus was not in the tomb. The two go to the tomb to see for themselves what is going on, racing to get there.

John runs faster than Peter, perhaps more anxious than Peter to know what is going on. Yet, when he arrives he stops short. Although arriving first he doesn’t have what it takes to enter the tomb and see that Christ is risen.

So many believers can call themselves Christians and even be loyal to their faith by attending church and trying hard to live a holy life. But many times the requirements of our faith can be too much for these believers.

We are often called to commit ourselves, our time, our talents, our money and our efforts in serving the Lord. It is part of our faith to be in ministry for God. Yet we can often lack the determination and trust to move forward and dare to risk things for the good of God’s kingdom. Too often we are like the eager disciple who stops at the doorway to the tomb, afraid to go deeper in our faith.

DAILY CHALLENGE: How can you go deeper in your faith? 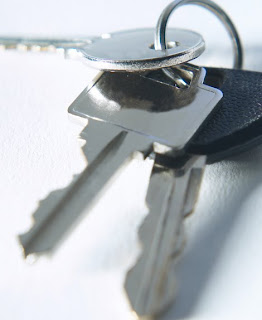 I hate to misplace things or lose things. I am a man of order and organization. To avoid losing things I keep them in specific places so I know where they are. My ring of keys – car, house, church – and my wallet are either in my pocket or on a specific corner of our bedroom dresser. If they are not in either of those two places then they are lost and I am in a panic.

After the crucifixion and burial, after the Sabbath that followed, Mary Magdalene, a devoted follower of Jesus, went to the tomb. What did Mary discover? How did she react? What did she say to Peter and the other disciple (we assume he is John)?

We can see by Mary’s reaction and her words that she was in a panic. Jesus was not where he was supposed to be. She expected him to be lying in the tomb but when she got there the tomb had been opened and the body was gone.

She ran to Peter and John and told them that someone had stolen the body. She had no idea where the body of Christ was.

It is apparent that Mary, although a close follower of Jesus, had not listened carefully to what Jesus had said. Or, if she did listen, she either didn’t understand or didn’t believe what he had said. The resurrection came as a surprise to her. She knew Jesus was dead and thought he would remain dead.

We can sometimes take that same approach with our faith. We may consider ourselves devoted believers. We attend church often. We try to be kind when we can. We try to be good.

But we can have a faith that is dead. The teachings of the Bible, the moving of the Holy Spirit may mean nothing to us. Christianity is a simple faith that remains rather dormant and lifeless inside our hearts.

With the resurrection we are called to be alive in our faith just as Jesus is alive. We are called to trust in the Lord and accept the many surprising ways that God can show His love in the world – showing love to us and sometimes showing love through us. If we are truly to be part of the resurrection of the Savior then our faith must be living in us, compelling us to do those things which may surprise us.

DAILY CHALLENGE: How can you keep your faith from being dormant and allow it to surprise you from time to time? 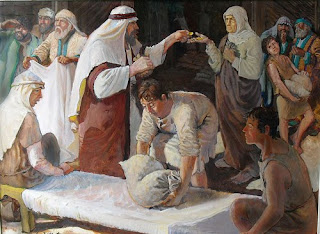 In speaking with other pastors about our churches I have occasionally been asked if our church conducts a Wednesday night service. Many churches do, but we don’t. I have often felt uncomfortable having to say that we didn’t have Wednesday services. And then I decided that when asked I would explain that our Sunday services are so good they carry us all the way through the week. We don’t need a Wednesday service.

In John’s account of the death of Jesus we have Joseph of Arimathea and Nicodemus joining together to prepare the body for burial. What did Nicodemus bring? What did the two men do? Where did they take Jesus? What stopped them from completing their work?

Nicodemus was among the religious leaders of the time and knew full well what was required to prepare a body for burial. He knew how to go about the rituals that were prescribed by the faith. He brought the proper spices and then joined with Joseph in wrapping the body according to custom.

For these two men it was obvious that this great teacher was dead. His body needed to be prepared and placed in a tomb. There it belonged and there it would stay.

But we know that the grave could not contain the Savior. We know that Jesus was indeed the very Son of God and that on the third day the tomb was no longer necessary. Jesus rose from the grave and changed everything.

Unfortunately we can have the same attitude of Nicodemus and Joseph. Our faith requires that we attend church on Sunday and offer the occasional prayer when needed. To us God is dead, or at least He is only alive and well one day a week.

We can overlook the fact that Jesus lives again, is living now, and should be alive in our hearts. We overlook that fact that God is the Lord not just on Sunday, but on every day of the week and in every moment.

DAILY CHALLENGE: How can you keep Jesus alive in your heart every day? 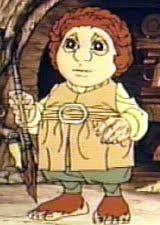 In J.R.R. Tolkien’s classic tale The Hobbit, the main character, Bilbo Baggins, starts off on an adventure unprepared. He leaves his home in a hurry, late for an appointment, and is upset to find that he has gone off without hat, walking stick or money. And most distressing to him is that he realizes he has left his home without his pocket handkerchief.

Whenever there is a moment of crisis or when we are confronted with an emotionally upsetting situation we can find ourselves completely unprepared, not at all ready to face what needs to be faced. In Mark’s account of the arrest of Jesus in the garden we get a sense of the turmoil the unexpected encounter has caused.

What did all the disciples do? What happened with the young man with the linen garment?

These last two verses of Mark seem to be a strange anomaly, an odd and graphic description of what was happening. Why do we need to hear about a young man who runs away from Jesus naked?

It seems to be presented to us so that we can see how desperate these followers were to get away from the responsibility of following Jesus just when things were getting difficult. The young man was so intent on escaping what was happening that his clothing no longer mattered to him.

As we prepare for Easter we must be certain that we have indeed prepared for the celebration. We must not only be ready to rejoice in the resurrection, but we must also be prepared to accept what the resurrection means.

It is more than just a gift to us through the love of God. With the new life Jesus gives us in the resurrection comes responsibility. We are called on to be a living example of the sacrificial love Jesus exhibited on the cross. We are called on to be strong enough to accept the forgiveness of Christ, to acknowledge our own sinfulness, and to set our eyes on a life that is more holy than what we have been living.

DAILY CHALLENGE: How can you be ready to accept a new life of forgiveness and Christian duty?